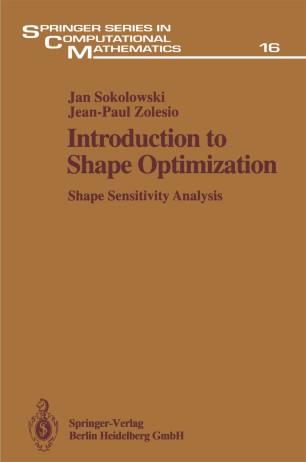 This book is motivated largely by a desire to solve shape optimization prob­ lems that arise in applications, particularly in structural mechanics and in the optimal control of distributed parameter systems. Many such problems can be formulated as the minimization of functionals defined over a class of admissible domains. Shape optimization is quite indispensable in the design and construction of industrial structures. For example, aircraft and spacecraft have to satisfy, at the same time, very strict criteria on mechanical performance while weighing as little as possible. The shape optimization problem for such a structure consists in finding a geometry of the structure which minimizes a given functional (e. g. such as the weight of the structure) and yet simultaneously satisfies specific constraints (like thickness, strain energy, or displacement bounds). The geometry of the structure can be considered as a given domain in the three-dimensional Euclidean space. The domain is an open, bounded set whose topology is given, e. g. it may be simply or doubly connected. The boundary is smooth or piecewise smooth, so boundary value problems that are defined in the domain and associated with the classical partial differential equations of mathematical physics are well posed. In general the cost functional takes the form of an integral over the domain or its boundary where the integrand depends smoothly on the solution of a boundary value problem.