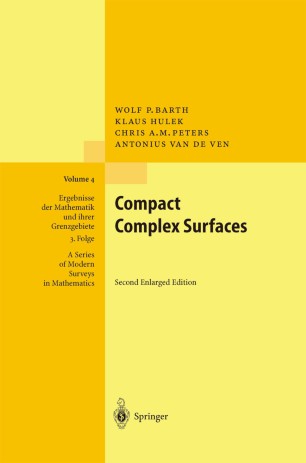 In the 19 years which passed since the first edition was published, several important developments have taken place in the theory of surfaces. The most sensational one concerns the differentiable structure of surfaces. Twenty years ago very little was known about differentiable structures on 4-manifolds, but in the meantime Donaldson on the one hand and Seiberg and Witten on the other hand, have found, inspired by gauge theory, totally new invariants. Strikingly, together with the theory explained in this book these invariants yield a wealth of new results about the differentiable structure of algebraic surfaces. Other developments include the systematic use of nef-divisors (in ac­ cordance with the progress made in the classification of higher dimensional algebraic varieties), a better understanding of Kahler structures on surfaces, and Reider's new approach to adjoint mappings. All these developments have been incorporated in the present edition, though the Donaldson and Seiberg-Witten theory only by way of examples. Of course we use the opportunity to correct some minor mistakes, which we ether have discovered ourselves or which were communicated to us by careful readers to whom we are much obliged.