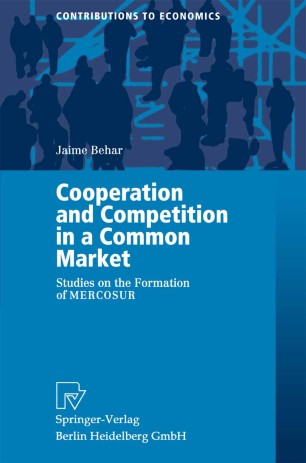 Cooperation and Competition in a Common Market

Studies on the Formation of MERCOSUR

The essays included in this book are the result ofseven years ofresearch spanning the 1990-1997 period. Most of them have been published in scientific magazines or as chapters of books. To the end of this edition, and in order to avoid repetitions, the original texts have been modified, particularly with regard to the titles and introductions ofthe chapters. Chapter two reproduces the article "Economic Integration and Intra-Industry Trade: The Case of the Argentine-Brazilian Free Trade Agreement", published in the Journal of Common Markets (vol XXIX, No 5, pp. 527-552, sept. 1991). Chapter three originates from an empirical study prepared for UNIDO, the United Nations Industrial Development Organization. The analytical framework and the preliminary conclusions of that work appeared in a working paper "The MERCOSUR Pattern of Intra-Industry Trade" (RP No 75, Stockholm: LAIS, 1997). Chapter four was published with the title "Plant-size Effects ofTrade: The Case of MERCOSUR Countries" as a chapter of the book Growth Trade and Integration in Latin America (W. Karlsson and A. Malaki (eds. ), Stockholm: LAIS, pp. 297-319, 1996). Chapter five in tum corresponds to the article entitled "Measuring the Effects of Economic Integration for the Southern Cone Countries: Industry Simulations of Trade Liberalization" as published in The Developing Economies (Vol. XXXIII, No 1, pp. 1-31, mars 1995). Finally, chapter six is the revised and updated version of the paper presented at the First European Congress ofLatinamericanists, which took place at Salamanca, Spain in June 1996.