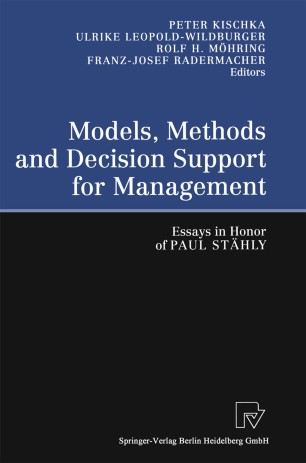 Essays in Honor of Paul Stähly

This title represents an ambitious undertaking, namely a broad view on the nature of intelligent decision making, which is characterized by the use of models and methods in the framework of decision support for management. With this title we want to reflect the scope of our field, but, at the same time, honor our colleague th Paul Stahly on the occasion of his 65 birthday. Paul Stahly has over decades invested his energy in developing the area of Operations Research from such a broad point of view. He has done this not only at his chairs at the HSG / University of St. Gallen and the University of Linz, but also on a broad international level as editor of ITOR and as influential member of all the Operations Research societies in the German speaking countries. He has, in particular, enriched our area by application-oriented research and industrial projects in fields such as logistics, emergency planning, [mance, and others, and he was pivotal in strengthening the cooperation between the national and international OR societies, particular in the German speaking area. VI Consequently, many colleagues who partly cooperated very closely with him, have contributed to this monograph. Some of these contributions have been presented at a colloquium in January 2001 in St. Gallen in honor of Paul Stahly. This colloquium was attended by many colleagues coming from Germany, Austria, Switzerland, Italy and even from the United States.