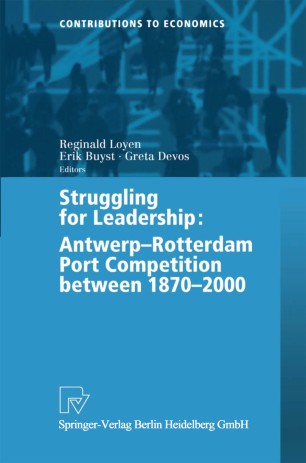 The present volume contains the proceedings of an international conference on the economic history of the seaports of Antwerp and Rotterdam (1870-2000). This venue was held at Antwerp on 10-11 May 2001 and was hosted by the Antwerp Port Authority. This international conference aimed at confronting the development of both ports. In the course of the last century and a half, economic growth in the ports of Antwerp and Rotterdam has been staggering. Maritime economic historians, economists and geographers alike have investigated the development of both ports extensively, but separately. So far, only a limited number of attempts have been made to analyse Rotterdam-Antwerp port history from a comparative perspective. The papers presented at the conference provide a challenging starting point to - certain how and why both ports reacted differently to virtually the same economic and political stimuli. By bringing together both historians, economists and lawyers with different fields of interest, we have attempted to put the history of the ports of Antwerp and Rotterdam in a broader international and comparative perspective.