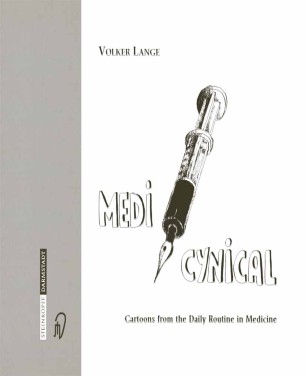 Cartoons from the Daily Routine in Medicine

Do cartoons that should speak to the observer flexible endoscope becomes a snake, 'Nessie' swims in themselves without using words require a foreword? the disinfection basin, and Laokoon and sons fight against Do Volker Lange's characteristic drawings, seen at least an endoscope. Seen from Lange's perspective, concepts once by almost everyone involved with medicine, need such as the drawer phenomenon, an onychomycosis, description? and the appendix appear in unique, new light. Does this book render more than a reason to laugh, Lange's cartoons depict the grotesque, the mysterious, more than a moment of 'aha'-experience, more than a and the fantastic: patient and physician drowning in fleeting instant of self-recognition? Do these cartoons liquor during lumbal puncture, a patient actually convey more than ideas that may initially appear even coughing out his lungs, and a neurosurgeon, who finds absurd or bizarre? emptiness when changing his patient's dressings, these Volker Lange has proven in previously published are moments of enlightenment that free us from the bonds material that he knows how to disclose the perhaps of a strictly scientific medicine fixed upon reality. Lange's intentionally overlooked parts of the medical profession. book is a treasure chest of such surrealistic surprises. Here sideswipes against both physicians' vanity and the With a few exceptions, Lange reveals his ideas using weight of the medical industry unmask much more than graphic expression only.

Professor Lange is the head physician for the Surgery Department, Schlosspark Clinic, Berlin, Medical School Hospital of the Charité, who became known as a cartoonist for his numerous caricatures in various medical journals (e.g., Deutsches Arzteblatt), his books and calendars.