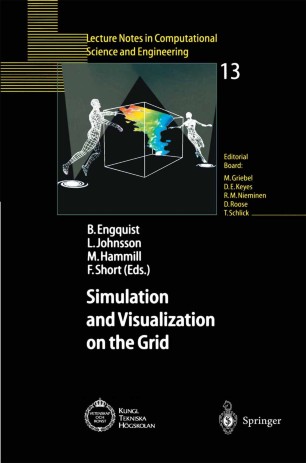 Simulation and Visualization on the Grid

It is now 30 years since the network for digital communication, the ARPA-net, first came into operation. Since the first experiments with sending electronic mail and performing file transfers, the development of networks has been truly remarkable. Today's Internet continues to develop at an exponential rate that even surpasses that of computing and storage technologies. About five years after being commercialized, it has become as pervasive as the tele­ phone had become 30 years after its initial deployment. In the United States, the size of the Internet industry already exceeds that of the auto industry, which has been in existence for about 100 years. The exponentially increas­ ing capabilities of communication, computing, and storage systems is also reshaping the way science and engineering are pursued. Large-scale simulation studies in chemistry, physics, engineering, and sev­ eral other disciplines may now produce data sets of ,several terabytes or petabytes. Similarly, almost all measurements today produce data in digital form, whether from collections of sensors, three-dimensional digital images, or video. These data sets often represent complex phenomena that require rich visualization capabilities and efficient data-mining techniques to under­ stand. Furthermore, the data may be produced and archived in several differ­ ent locations, and the analysis carried out by teams with members at several locations-possibly distinct from those with significant storage, computation, or visualization facilities. The emerging computational Grids enable the transparent use of remote instruments, computational and data resources.