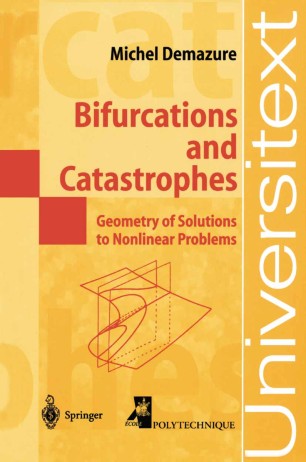 Geometry of Solutions to Nonlinear Problems

Based on a lecture course at the Ecole Polytechnique (Paris), this text gives a rigorous introduction to many of the key ideas in nonlinear analysis, dynamical systems and bifurcation theory including catastrophe theory. Wherever appropriate it emphasizes a geometrical or coordinate-free approach which allows a clear focus on the essential mathematical structures. Taking a unified view, it brings out features common to different branches of the subject while giving ample references for more advanced or technical developments.

"This book gives an introduction to the basic ideas in dynamical systems and catastrophe and bifurcation theory. It starts with the geometrical concepts which are necessary for the rest of the book. In the first four chapters, the author introduces the notion of local inversion for maps, submanifolds, tranversality, and the classical theorems related to the local theory of critical points, that is, Sard's theorem and Morse's lemma. After a study of the classification of differentiable maps, he introduces the notion of germ and shows how catastrophe theory can be used to classify singularities; elementary catastrophes are discussed in Chapter 5. Vector fields are the subject of the rest of the book. Chapter 6 is devoted to enunciating the existence and uniqueness theorems for ordinary differential equations; the notions of first integral, one-parameter group and phase portrait are also introduced in this part. Linear vector fields and the topological classification of flows are studied in Chapter 7. Chapter 8 is devoted to the classification of singular points of vector fields. Lyapunov theory and the theorems of Grobman and Hartman are also described in this chapter. The notions of PoincarÃ© map and closed orbit, and the concepts necessary for the classification of closed orbits, are the principal ideas of Chapter 9; this chapter finishes with the notion of structural stability and the classification of structurally stable vector fields in dimension 2 and Morse-Smale vector fields. Finally, in Chapter 10 the author defines the idea of bifurcation of phase portraits and describes the simplest local bifurcations: saddle-node bifurcation, Hopf bifurcation, etc.

This book can be used as a textbook for a first course on dynamical systems and bifurcation theory."  (Joan Torregrosa, Mathematical Reviews)