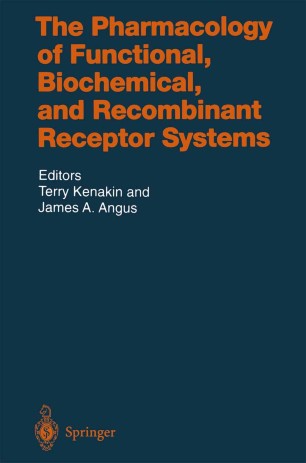 The Pharmacology of Functional, Biochemical, and Recombinant Receptor Systems

This, the 148th volume of the Handbook of Experimental Pharmacology series, focuses on the very core of pharmacology, namely receptor theory. It is fitting that the originator of receptor pharmacology, A. J. CLARK, authored the fourth volume of this series 63 years ago. In that volume CLARK further developed his version of receptor theory first described four years earlier in his classic book The Mode of Action of Drugs. An examination of the topics covered in volume 4 reveals a striking similarity to the topics covered in this present volume; pharmacologists today are still as interested in unlocking the secrets of dose-response relationships to reveal the biological and che­ mical basis of drug action as they were over half a century ago. Sections in that 1937 volume such as "Curves relating exposure to drugs with biological effects" and "Implications of monomolecular theory" show Clark's keen insight into the essential questions that required answers to move pharma­ cology forward. With the advent of molecular biological cloning of human receptors has come a transformation of receptor pharmacology. Thus the expression of human receptors into surrogate host cells helped unlock secrets of receptor mechanisms and stimulus-transduction pathways. To a large extent, this elim­ inates the leap of faith required to apply receptor activity of drugs tested on animal receptor systems to the human therapeutic arena. However, a new leap of faith concerning the veracity of the effects found in recombinant systems with respect to natural ones is now required.