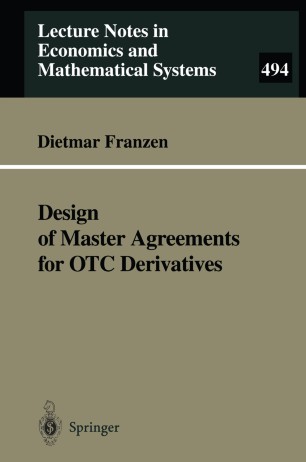 I first came across the issue of derivatives documentation when writing my diploma thesis on measuring the credit risk ofOTC derivatives while I was an economics student at the University of Bonn. Despite the fact that security design has been an area of research in economics for many years and despite the widespread use of derivatives documentation in financial practice, the task of designing contracts for derivatives transactions has not been dealt with in financial theory. The one thing that aroused my curiosity was that two parties with usually opposing interests, namely banking supervisors and the banking industry's lobby, unanimously endorse the use ofcertain provisions in standardized contracts called master agreements. Do these provisions increase the ex ante efficiency of contracts for all parties involved? I actually began my research expecting to find support for the widely held beliefs about the efficiency or inefficiency of certain provisions and was sur­ prised to obtain results that contradicted the conventional wisdom. I would strongly advise against using these results in any political debate on deriva­ tives documentation. They were obtained within a highly stylized model with some restrictive assumptions. This work should rather be seen as an attempt to formalize the discussion on derivatives documentation and to challenge the notion that certain provisions are generally ex ante efficient. It is also an invitation to all those advocating the use of certain provisions in master agreements to formalize their arguments and to explain the economic ratio­ nale behind these provisions.