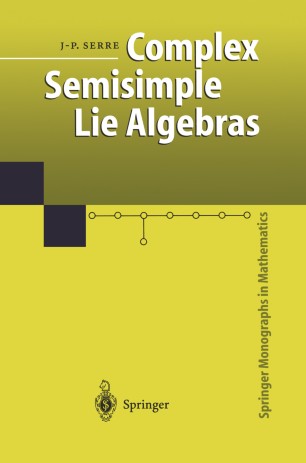 These short notes, already well-known in their original French edition, give the basic theory of semisimple Lie algebras over the complex numbers, including classification theorem. The author begins with a summary of the general properties of nilpotent, solvable, and semisimple Lie algebras. Subsequent chapters introduce Cartan subalgebras, root systems, and linear representations. The last chapter discusses the connection between Lie algebras, complex groups and compact groups; it is intended to guide the reader towards further study.

From the reviews of the French edition:

"...the book is intended for those who have an acquaintance with the basic parts of the theory, namely, with those general theorems on Lie algebras which do not depend on the notion of Cartan subalgebra. The author begins with a summary of these general theorems and then discusses in detail the structure and representation theory of complex semisimple Lie algebras. One recognizes here a skillful ordering of the material, many simplifications of classical arguments and a new theorem describing fundamental relations between canonical generators of semisimple Lie algebras. The classical theory being thus introduced in such modern form, the reader can quickly reach the essence of the theory through the present book." (Mathematical Reviews)