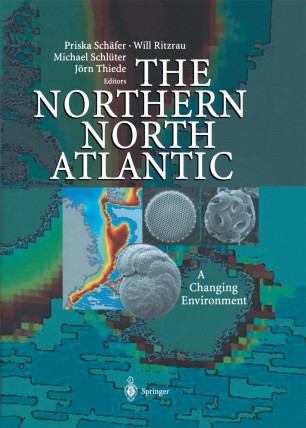 The northern North Atlantic is one of the regions most sensitive to past and present global changes. This book integrates the results of an interdisciplinary project studying the properties of the Greenland-Iceland-Norwegian Seas and the processes of pelagic and benthic particle formation, particle transport, and deposition in the deep-sea sediments. Ice-related and biogeochemical processes have been investigated to decipher the spatial and temporal variability of the production and fate of organic carbon in this region. Isotopic stratigraphy, microfossil assemblages and paleotemperatures are combined to reconstruct paleoceanographic conditions and to model past climatic changes in the Late Quaternary. The Greenland-Iceland-Norwegian Seas can now be considered one of the best studied subbasins of the world`s oceans.

"This is a … information-packed book that gives a highly detailed picture of the latest research on the palaeoceanography of the Norwegian and Greenland seas and their modern role in ocean climate change. … There is a focus on the palaeoceanographic record as revealed by sediments, but many other areas are covered, including modern-day oceanography, sea ice, plankton, and benthos. … as a review of latest research results it is invaluable." (Peter Wadhams, Polar Record, Vol. 39 (3), 2003)

"The highlights of the German Science Foundation’s interdisciplinary research project SFB 313 … are presented in this volume … . the quality of this volume is high, the graphics are generally good and the standard set by the referees and editors commendable for an edited collection such as this. … whether you are looking for a multidisciplinary, regional synthesis or seeking specific data, I cannot think of a better starting-point or introduction to the northern North Atlantic, and strongly recommend this book." (William Austin, The Holocene, Vol. 13 (4), 2003)

"The twenty-five chapters in this impressive volume represent the summary of 14 years of research which was largely funded through the University of Kiel, Germany. … I feel that this volume represents a major and successful synthesis of northern North Atlantic sediment and paleoceanographic processes. Hence it is a book that I would strongly recommend for academic libraries that deal with the Earth Sciences and issues of Past Environments. It is a book that professionals will want to consult and read." (John T. Andrews, Journal of Paleolimnology, Vol. 28, 2002)

"The interdisciplinary research project ‘Global environmental change: the northern North Atlantic’ (SFB 313) was a long-term scientific program at the University of Kiel, funded from 1985 to 1998 mainly by the German Science Foundation. … The main results of this program … are summarized in this book. … There is much to interest climatologists in this book, and it forms essential reading for research workers interested in the causes of climatic variations in western Europe, both now and in the past." (J. G. Lockwood, International Journal of Climatology, Vol. 22 (11), 2002)