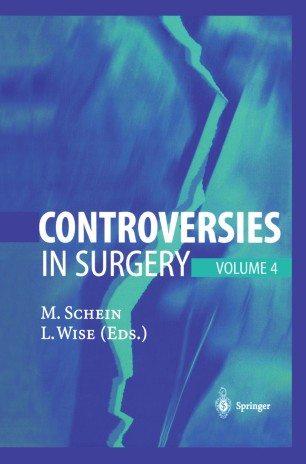 "When a thing ceases to be a subject of controversy, it ceases to be a subject of interest. " WILLIAM HAZLITT (1778-1830) This is the fourth volume in a series which we started in 1997. In 1976, Varco and Delaney edited a "surgical bestseller" entitled Controversy in Surgery. This was fol­ lowed by a second volume in 1985. The immense success of these books among both surgical trainees and experienced surgeons, and their wide international ap­ peal, supported the editors' notion that a view of controversy is integral to teach­ ing. However, despite major advances in surgical science and practice, no other similar publication has since been put together with the objective of addressing major controversies in surgery. The aim of this series is to address such deficiency by covering the most crucial current controversies in general, vascular and trauma surgery. Since almost everything is controversial in surgery, we will be able to tackle different issues almost each year. The editors have selected a nationally/internationally recognized authority for each topic. Most books available today are either "North American:' "British-Com­ monwealth" or "British-European:' contributing to the constant transatlantic rival­ ry. Our series specifically aims to bridge this "culture gap" and includes North American, British, European, and other authors while maintaining a cohesive structure. This will hopefully also broaden the appeal of such a book across both sides of the Atlantic and beyond.