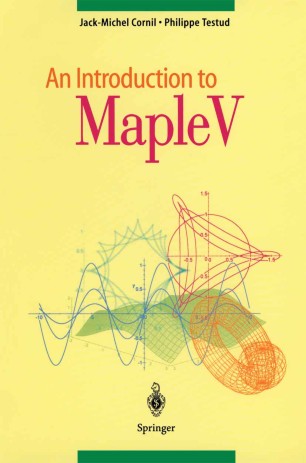 An Introduction to Maple V

MAPLE is a computer algebra system which, thanks to an extensive library of sophisticated functions, enables both numerical and formal computations to be performed. Until recently, such systems were only available to professional users with access to mainframe computers, but the rapid improvement in the performance of personal computers (speed, memory) now makes them accessible to the majority of users. The latest versions of MAPLE belong to this new generation of systems, allowing a growing audience of users to become familiar with computer algebra. This work does not set out to describe all the possibilities of MAPLE in an exhaustive manner; there is already a great deal of such documentation, including extensive online help. However, these technical manuals provide a mass of information which is not always of great help to a beginner in computer algebra who is looking for a quick solution to a problem in his own speciality: mathematics, physics, chemistry, etc. This book has been designed so that a scientist who wishes to use MAPLE can find the information he requires quickly. It is divided into chapters which are largely independent, each one being devoted to a separate subject (graphics, differential equations, integration, polynomials, linear algebra, ... ), enabling each user to concentrate on the functions he really needs. In each chapter, deliberately simple examples have been given in order to fully illustrate the syntax used.