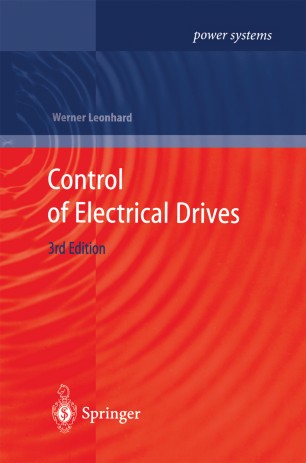 Electrical drives play an important role as electromechanical energy convert­ ers in transportation, material handling and most production processes. The ease of controlling electrical drives is an important aspect for meeting the in­ creasing demands by the user with respect to flexibility and precision, caused by technological progress in industry as well as the need for energy conser­ vation. At the same time, the control of electrical drives has provided strong incentives to control engineering in general, leading to the development of new control structures and their introduction to other areas of control. This is due to the stringent operating conditions and widely varying specifications - a drive may alternately require control of torque, acceleration, speed or position - and the fact that most electric drives have - in contrast to chem­ ical or thermal processes - well defined structures and consistent dynamic characteristics. During the last years the field of controlled electrical drives has undergone rapid expansion due mainly to the advances of semiconductors in the form of power electronics as well as analogue and digital signal electronics, eventu­ ally culminating in microelectronics and microprocessors. The introduction of electronically switched solid-state power converters has renewed the search for adjustable speed AC motor drives, not subject to the limitations of the mechanical commutator of DC drives which dominated the field for a century.