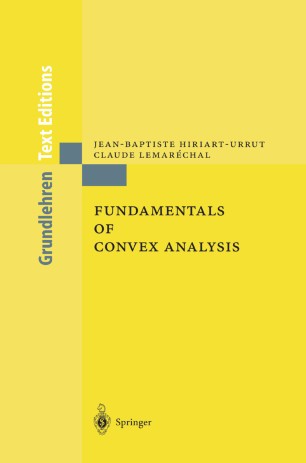 This book is an abridged version of our two-volume opus Convex Analysis and Minimization Algorithms [18], about which we have received very positive feedback from users, readers, lecturers ever since it was published - by Springer-Verlag in 1993. Its pedagogical qualities were particularly appreciated, in the combination with a rather advanced technical material. Now [18] hasa dual but clearly defined nature: - an introduction to the basic concepts in convex analysis, - a study of convex minimization problems (with an emphasis on numerical al- rithms), and insists on their mutual interpenetration. It is our feeling that the above basic introduction is much needed in the scientific community. This is the motivation for the present edition, our intention being to create a tool useful to teach convex anal­ ysis. We have thus extracted from [18] its "backbone" devoted to convex analysis, namely ChapsIII-VI and X. Apart from some local improvements, the present text is mostly a copy of the corresponding chapters. The main difference is that we have deleted material deemed too advanced for an introduction, or too closely attached to numerical algorithms. Further, we have included exercises, whose degree of difficulty is suggested by 0, I or 2 stars *. Finally, the index has been considerably enriched. Just as in [18], each chapter is presented as a "lesson", in the sense of our old masters, treating of a given subject in its entirety.