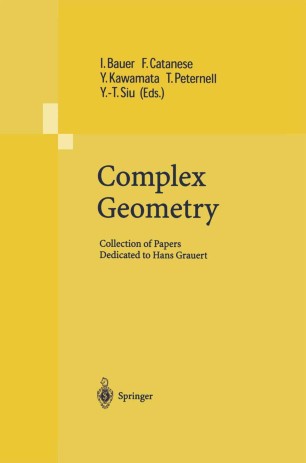 This volume contains a collection of research papers dedicated to Hans Grauert on the occasion of his seventieth birthday. Hans Grauert is a pioneer in modern complex analysis, continuing the il­ lustrious German tradition in function theory of several complex variables of Weierstrass, Behnke, Thullen, Stein, Siegel, and many others. When Grauert came on the scene in the early 1950's, function theory was going through a revolutionary period with the geometric theory of complex spaces still in its embryonic stage. A rich theory evolved with the joint efforts of many great mathematicians including Oka, Kodaira, Cartan, and Serre. The Car­ tan Seminar in Paris and the Kodaira Seminar provided important venues an for its development. Grauert, together with Andreotti and Remmert, took active part in the latter. In his career he has nurtured a great number of his own doctoral students as well as other young mathematicians in his field from allover the world. For a couple of decades his work blazed the trail and set the research agenda in several complex variables worldwide. Among his many fundamentally important contributions, which are too numerous to completely enumerate here, are: 1. The complete clarification of various notions of complex spaces. 2. The solution of the general Levi problem and his work on pseudo convexity for general manifolds. 3. The theory of exceptional analytic sets. 4. The Oka principle for holomorphic bundles. 5. The proof of the Mordell conjecture for function fields. 6. The direct image theorem for coherent sheaves.