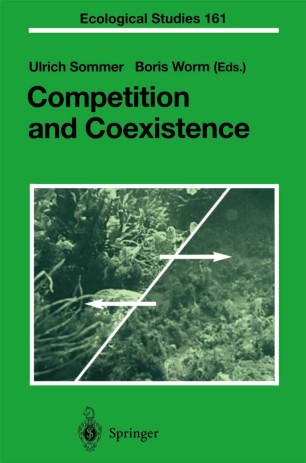 The question "Why are there so many species?" has puzzled ecologist for a long time. Initially, an academic question, it has gained practical interest by the recent awareness of global biodiversity loss. Species diversity in local ecosystems has always been discussed in relation to the problem of competi­ tive exclusion and the apparent contradiction between the competitive exclu­ sion principle and the overwhelming richness of species found in nature. Competition as a mechanism structuring ecological communities has never been uncontroversial. Not only its importance but even its existence have been debated. On the one extreme, some ecologists have taken competi­ tion for granted and have used it as an explanation by default if the distribu­ tion of a species was more restricted than could be explained by physiology and dispersal history. For decades, competition has been a core mechanism behind popular concepts like ecological niche, succession, limiting similarity, and character displacement, among others. For some, competition has almost become synonymous with the Darwinian "struggle for existence", although simple plausibility should tell us that organisms have to struggle against much more than competitors, e.g. predators, parasites, pathogens, and envi­ ronmental harshness.