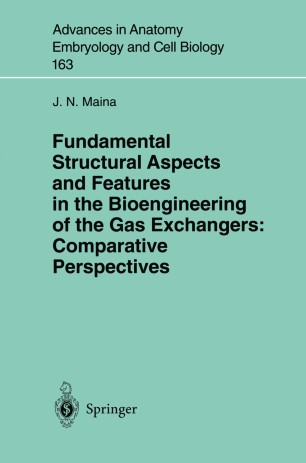 Fundamental Structural Aspects and Features in the Bioengineering of the Gas Exchangers: Comparative Perspectives

The history of biology is replete with examples of how comparative biology helped clarify the meaning of structure and function in complex animals. Indeed, without the comparative approach to biology, the birth of physiology would have been delayed. Fishman (1979) Comparative morphologists are challenged to discern the changes that have occurred in evolution and development of the forms and states of organisms as well as to explain the factors that compelled them (e.g. Dullemeijer 1974). The main objective of this contribution is to present what I deem to be some of the fundamental structural aspects in the design of respiratory or­ gans while debating and speculating on when, how and why these states were founded. My main thesis is that the modern gas exchangers are products of protracted processes that have en­ tailed adaptation to specific environments and lifestyles. Only those feasible designs that have proven adequately competent in meeting demands for molecular oxygen have been preserved. Unfortunately, August Krogh's (Krogh 1941) and Pierre Dejours' (Dejours 1975) seminal works on the comparative physiology of the respiratory organs have not been paralleled by equally exten­ sive and detailed morphological work. Our approach has been to look into the limiting functional properties as regards the respi­ ratory capacities of gas exchangers while finding out the specific structural adaptations that have evolved to meet the metabolic needs or to look into form and to discern how it limits function. This has allowed a deduction of structure-function correlation.