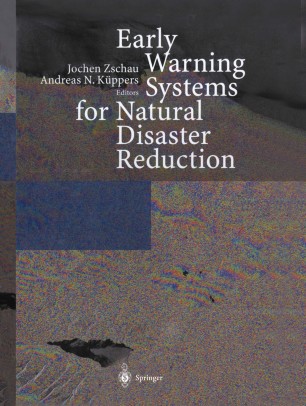 This volume is the result of the International IDNDR-Conference on Early Warning Systems for the Reduction of Natural Disasters, held at the Geo­ ForschungsZentrum in Potsdam, Germany from 7-11 September 1998. En­ dorsed by the United Nations International Decade for Natural Disasters Reduc­ tion which had been established by the United Nations General Assembly in December 1989, it was jointly organised by the GeoForschungsZentrum Pots­ dam and the German IDNDR-Committee. The event brought together 370 scientists, public officials, and representatives of the United Nations system, non-governmental and international organisations and diverse professional, commercial, and civic individuals from 86 countries. Together they comprised a wide and multidisciplinary range of experience, as both providers and users of early warning and preparedness information related to natural disasters. The Potsdam Early Warning Conference represented the first major thematic com­ ponent of IDNDR's concluding evaluation. It provides recommendations to en­ sure disaster reduction into the 21st Century. The conference dealt with an essential goal of the decade, expressed as a ma­ jor priority of the Decade's Scientific and Technical Committee. It was included in the Plan of Action adopted at the 1994 World Conference on Natural Disas­ ter Reduction in Yokohama, Japan, and was the subject of three subsequent UN General Assembly resolutions on the improved effectiveness of early warning between 1994 and 1997. The German Minister for Foreign Affairs, Mr.