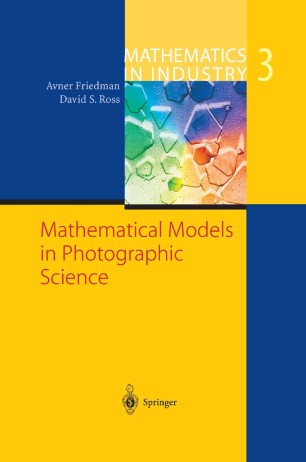 Part of the Mathematics in Industry book series (MATHINDUSTRY, volume 3)

th Although photography has its beginning in the 17 century, it was only in the 1920’s that photography emerged as a science. And as with other s- ences, mathematics began to play an increasing role in the development of photography. The mathematical models and problems encountered in p- tography span a very broad spectrum, from the molecular level such as the interaction between photons and silver halide grains in image formation, to chemical processing in ?lm development and issues in manufacturing and quality control. In this book we present mathematical models that arise in today’s p- tographic science. The book contains seventeen chapters, each dealing with oneareaofphotographicscience.Eachchapter,exceptthetwointroductory chapters, begins with general background information at a level understa- able by graduate and undergraduate students. It then proceeds to develop a mathematical model, using mathematical tools such as Ordinary Di?erential Equations, Partial Di?erential Equations, and Stochastic Processes. Next, some mathematical results are mentioned, often providing a partial solution to problemsraisedby the model.Finally,mostchaptersinclude problems.By the nature of the subject, there is quite a bit ofdisparity in the mathematical level of the various chapters.