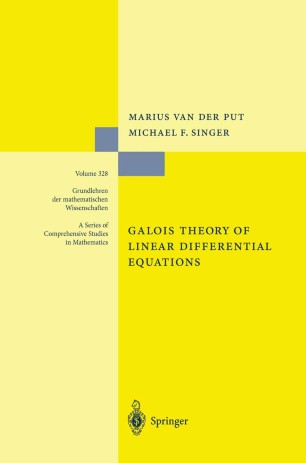 Linear differential equations form the central topic of this volume, Galois theory being the unifying theme.
A large number of aspects are presented: algebraic theory especially differential Galois theory, formal theory, classification, algorithms to decide solvability in finite terms, monodromy and Hilbert's 21st problem, asymptotics and summability, the inverse problem and linear differential equations in positive characteristic. The appendices aim to help the reader with concepts used, from algebraic geometry, linear algebraic groups, sheaves, and tannakian categories that are used.
This volume will become a standard reference for all mathematicians in this area of mathematics, including graduate students.

"This book offers a detailed and thorough introduction to Galois Theory for differential fields and its applications to linear differential equations." (A. Cap, Monatshefte für Mathematik, Vol. 145 (4), 2005)

"At last, a thorough exposition, including most of the facets it presents nowadays, of this beautiful analogue of the Galois theory of field extensions … . The book is in fact already becoming a standard reference, not only for differential Galois theory proper, but also for the many areas which have accompanied its recent growth … . Any … student working in these areas will benefit from this book, which clearly belongs to all mathematical libraries." (D.Bertrand, Jahresberichte der Deutschen Mathematiker Vereinigung, Vol. 106 (4), 2004)

"This is a great book, which will hopefully become a classic in the subject of differential Galois theory. … The book is carefully written: the authors have made a great effort to state the results in a language as common as possible, making use of specialized terminology only when strictly necessary. The material is introduced step by step and with a clear distinction of what is ‘common knowledge’ … and what is ‘specifically required’… ." (Pedro Fortuny Ayuso, Mathematical Reviews, 2004 c)

"This book is an introduction to the algebraic, algorithmic and analytic aspects of Galois theory of homogenous linear differential equations. … This book presents many of the recent results and approaches to this classical field. … This book is comprehensively written and thorough … ." (Ernie Kalnin, New Zealand Mathematical Society Newsletter, Issue 90, April, 2004)

"The book is aimed to be an introduction into the theory and the authors attempted to make the subject accessible to anyone with a background in algebra and analysis … . It contains many examples and exercises. Without any doubt, the book is devoted to a very interesting and useful topic and can be highly recommended." (J.Synnatzschke, Zeitschrift für Analysis und ihre Anwendungen – ZAA, Vol. 22 (3), 2003)