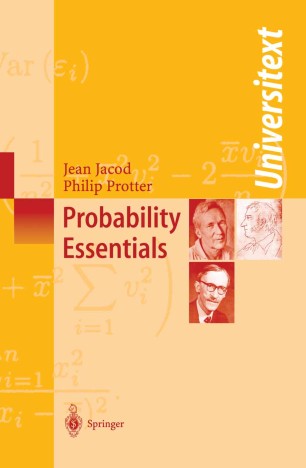 We have made small changes throughout the book, including the exercises, and we have tried to correct if not all, then at least most of the typos. We wish to thank the many colleagues and students who have commented c- structively on the book since its publication two years ago, and in particular Professors Valentin Petrov, Esko Valkeila, Volker Priebe, and Frank Knight. Jean Jacod, Paris Philip Protter, Ithaca March, 2002 Preface to the Second Printing of the Second Edition We have bene?ted greatly from the long list of typos and small suggestions sent to us by Professor Luis Tenorio. These corrections have improved the book in subtle yet important ways, and the authors are most grateful to him. Jean Jacod, Paris Philip Protter, Ithaca January, 2004 Preface to the First Edition We present here a one semester course on Probability Theory. We also treat measure theory and Lebesgue integration, concentrating on those aspects which are especially germane to the study of Probability Theory. The book is intended to ?ll a current need: there are mathematically sophisticated s- dents and researchers (especially in Engineering, Economics, and Statistics) who need a proper grounding in Probability in order to pursue their primary interests. Many Probability texts available today are celebrations of Pr- ability Theory, containing treatments of fascinating topics to be sure, but nevertheless they make it di?cult to construct a lean one semester course that covers (what we believe) are the essential topics.

"(The book is) a lean and largely self-contained introduction to the modern theory of probability, aimed at advanced undergraduate or beginning graduate students. The 28 short chapters belie the book's genesis as polished lecture notes; the exposition is sleek and rigorous and each chapter ends with a supporting collection of mainly routine exercises. ... The authors make it clear what luggage is required for this exhilarating trek,... a good knowledge of advanced calculus, some linear algebra, and some "mathematical sophistication". With this understood, the itinerary is immaculately paced and planned with just the right balances of technical ascents and pauses to admire the scenery. Within the constraints of a slim volume, it is hard to imagine how the authors could have done a more effective or more attractive job." The Mathematical Gazette, Vol. 84, No 500, 2000 "The authors provide the shortest path through the twenty-eight chapter headings. The topics are treated in a mathematically and pedagogically digestible way. The writing is concise and crisp: the average chapter length is about eight pages. ... Numerous exercises add to the value of the text as a teaching tool. In conclusion, this is an excellent text for the intended audience."
Short Book Reviews, Vol. 21, No. 2, 2001
Buy options