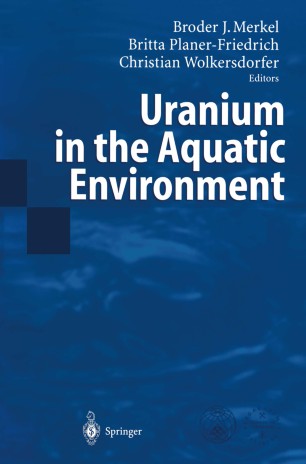 Uranium in the Aquatic Environment

Preface Uranium is a radioactive element and a heavy metal which is naturally occurring in ground and surface water. Although uranium is enriched in granites and gneiss ground water from these host rocks often shows low to intermediate uranium con­ centrations, while some ground waters from sandstone and carbonate aquifers show elevated uranium concentrations up to several hundred mg/1 without man made impact. On the other side, surface water contains increased anthropogenic uranium concentrations due to the intensive use of phosphate fertilizers and in mining areas due to mining and milling activities. Saxony and Thuringia both be­ ing states of the reunified Germany are probably an area where uranium mining activities have impacted the environment more severely than in any other part of the world. Thus, the federal government of Germany allocated huge amounts of money for the rehabilitation work, a unique proceeding without precedent in min­ ing history. In October 1995 the first international conference on Uranium Mining and Hydrogeology (UMM I) was held in Freiberg being organized by the Department of Geology at the technical University Freiberg by the support of the Saxon State Ministry of Geology and Environment. Due to the large scientific interest in the topic ofuranium a second conference (UMH II) took place in Freiberg in Septem­ ber 1998.