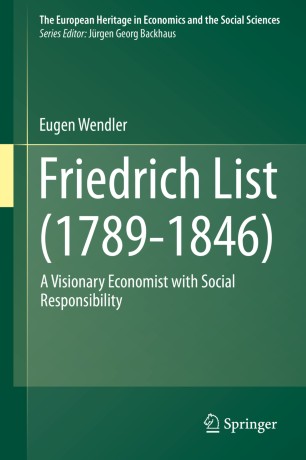 A Visionary Economist with Social Responsibility

Part of the The European Heritage in Economics and the Social Sciences book series (EHES, volume 16)

Friedrich List (1789-1846) was a prophet of social market economy, national economy and the infant-industry theory. In this comprehensive biography the international influence and reception of List’s theories is presented together with his extraordinary vita. List was a notable early advocate of economic integration of the many separate states of 19th century Germany. His basic theory is that of productive resources and the need to protect infant industries until they have matured enough to stand alone. He is recognized as a visionary economist with social responsibility and as an influential railway pioneer. He was a liberal and a democrat who promoted an extended representative democracy, including respect for human rights and civil liberties, to accompany industrial development. His highly influential main work “The National System of Political Economy” has been translated into many languages. Eugen Wendler, the renowned author and List expert, not only builds upon his many years of research, but also discusses several new sources. This richly illustrated book is as informative as it is well written.