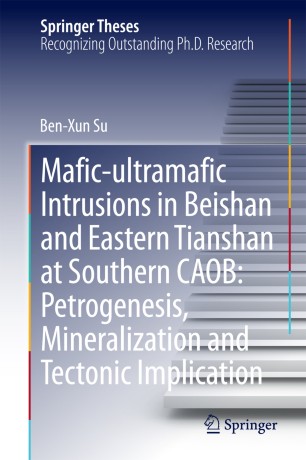 The widespread mafic-ultramafic complexes in the Earth are well-known as their hosting Ni-Cu-PGE ore deposits, and their petrogenesis and mineralization have become hot issues in the geological studies. This thesis comprehensively investigated the petrology, mineralogy, geochemistry and geochronology of several mafic-ultramafic complexes in the Beishan Terrane, southern Central Asian Orogenic Belt aimed at systematically determining the mineralization and petrogenetic processes responsible for the formation of the complexes and placing constraints on the tectonic evolution of the Eastern Tianshan and Beishan, and the Early Permian mantle plume. The thesis identified mineralizing indicators of Ni-Cu sulfide deposits and defined the roles of partial melting, fractional crystallization, crustal assimilation and magma injection. The systematical isotopic compositions revealed the mantle source of the mafic-ultramafic complexes had undergone the subduction-related modifications both from the South Tianshan Ocean and subsequently the Junggar Ocean, and that the complexes were emplaced in the period of 269-285 Ma coeval with the 280 Ma mantle plume event in the Tarim Craton. The results of this thesis provide new insights about the tectonic setting, magma evolution, ore genesis, and exploration implications of the mafic-ultramafic complexes in Central Asian Orogenic Belt. Dr. Benxun Su works at the Institute of Geology and Geophysics, Chinese Academy of Sciences, China.