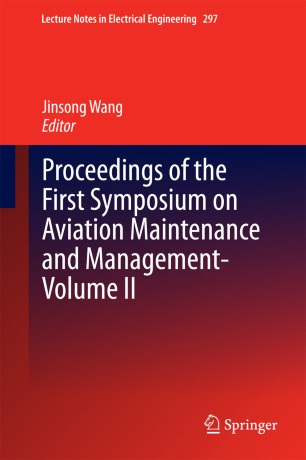 Proceedings of the First Symposium on Aviation Maintenance and Management collects selected papers from the conference of ISAMM 2013 in China held in Xi’an on November 25-28, 2013. The book presents state-of-the-art studies on the aviation maintenance, test, fault diagnosis, and prognosis for the aircraft electronic and electrical systems. The selected works can help promote the development of the maintenance and test technology for the aircraft complex systems. Researchers and engineers in the fields of electrical engineering and aerospace engineering can benefit from the book.

Jinsong Wang is a professor at School of Mechanical and Electronic Engineering of Northwestern Polytechnical University, China.

Jinsong Wang received his Instrument Science and Technology degree from Tsinghua University in 1986 and his M.SC. and Ph.D. degrees in Instrument Science and Technology from Tsinghua University in 1991. From 1991 to 2008 he was with the Department of Instrument Science and Technology at Tsinghua University. He is now a professor in School of Mechanical and electronic engineering at Northwestern Polytechnical University. He has published approximate 200 technical papers and warned the first prize of Scientific Developments in Ministry of Education. He is a Cheung Kong professor. His research interests include aircraft electrical engineering, mechanical engineering, control, signal processing and robotics. He is also the president of Northwestern Polytechnical University. He is a member of IEEE, ASME and SME and editors of four Chinese journals about robotics.