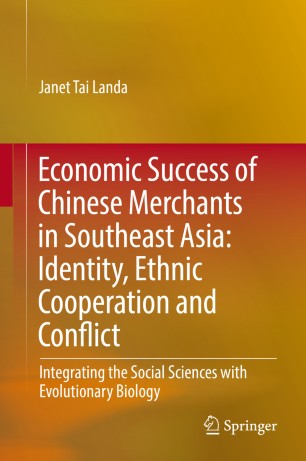 This book provides an original analysis of the economic success of Overseas Chinese merchants in Southeast Asia: The ethnically homogeneous group of Chinese middlemen is an informal, low-cost organization for the provision of club goods, e.g. contract enforcement, that are essential to merchants’ success. The author’s theory - and various extensions, with emphasis on kinship and other trust relationships - draws on economics and the other social sciences, and beyond to evolutionary biology. Empirical material from her fieldwork forms the basis for developing her unique, integrative and transdisciplinary theoretical framework, with important policy implications for understanding ethnic conflict in multiethnic societies where minority groups dominate merchant roles.

The study of the Chinese merchants is of important and general significance for many reasons, as masterly demonstrated by this collected volume. Only recently did economists begin to appreciate the role of legal institutions in facilitating trade. Janet Landa has gone further to call our attention to the presence of social institutions, such as the ethnically homogeneous Chinese middleman group, mutual aid communities, social norms, trust, identity, and guanxi, to structure exchange relationships, without which trade and specialization would be severely impaired... In conducting her reserch on merchants, Landa also becomes a pioneer in engaging economic reserch with the rich scholarship in other social sciences and with evolutionary biology, and made them an integral part of her theoretical framework.

Janet Landa is a pioneer in the application of transaction cost models to the study of ethnically-based economic networks. The present volume synthesizes a lifetime of work on Chinese middlemen. It combines the analytic methods

of economics with theoretically-driven ethnographic research. It shows how division of labor within ethnic communities, social capital based on trust relationships, a deeply embedded code of ethics, the potential for monitoring and sanctioning dishonesty, and ways to internally generate mutual trust, the foundation of social capital, can explain the success of ethnic middleman entrepreneurs.

[Janet Landa's] new book sparkles with interdisciplinary insight into a timeless question: How can we understand the functions, as well as the dysfunctions, of multiethnic societies that exhibit ethnically-based patterns of economic specialization, such as the ethnically Chinese traders in Southeast Asia? Landa draws on her decades of work to provide answers firmly grounded in the New Institutional Economics and its implications for the central role ethnically homogeneous middleman groups play in societies where government does not provide reliable protection of private property and enforcement of contracts.

“This book, examining Bangladeshi labour migration to Singapore, contributes significantly to our understanding of the growing phenomenon of migration within Asia. … In this book, author Mizanur Rahman departs from the economic narrative that is dominant in the migration literature to explain the drivers of Bangladeshi migration and instead relies on social and cultural explanations in his analysis. The strength of this book is that it is based on extensive fieldwork by the author, conducted over close to two decades.” (Mathew Mathews, Journal of Contemporary Asia, April, 2018)​
Buy options