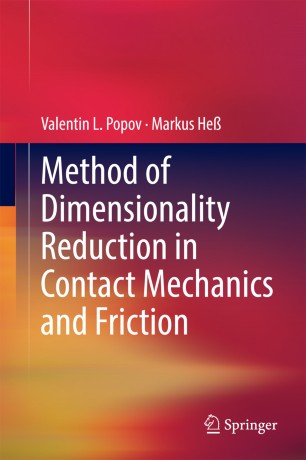 Method of Dimensionality Reduction in Contact Mechanics and Friction

This book describes for the first time a simulation method for the fast calculation of contact properties and friction between rough surfaces in a complete form. In contrast to existing simulation methods, the method of dimensionality reduction (MDR) is based on the exact mapping of various types of three-dimensional contact problems onto contacts of one-dimensional foundations. Within the confines of MDR, not only are three dimensional systems reduced to one-dimensional, but also the resulting degrees of freedom are independent from another. Therefore, MDR results in an enormous reduction of the development time for the numerical implementation of contact problems as well as the direct computation time and can ultimately assume a similar role in tribology as FEM has in structure mechanics or CFD methods, in hydrodynamics. Furthermore, it substantially simplifies analytical calculation and presents a sort of “pocket book edition” of the entirety contact mechanics. Measurements of the rheology of bodies in contact as well as their surface topography and adhesive properties are the inputs of the calculations. In particular, it is possible to capture the entire dynamics of a system – beginning with the macroscopic, dynamic contact calculation all the way down to the influence of roughness – in a single numerical simulation model. Accordingly, MDR allows for the unification of the methods of solving contact problems on different scales. The goals of this book are on the one hand, to prove the applicability and reliability of the method and on the other hand, to explain its extremely simple application to those interested.

Prof. Dr. rer. nat. Valentin L. Popov studied physics (1976-1982) and obtained his doctorate in 1985 from the Moscow State Lomonosov University. He worked at the Institute of Strength Physics of the Russian Academy of Sciences. After a guest-professorship in the field of theoretical physics at the University of Paderborn (Germany) from 1999 to 2002, he has headed since 2002 the department of System Dynamics and the Physics of Friction in the Institute of Mechanics at the Berlin University of Technology.

Dr. Markus Heß studied physical engineering sciences at TU Berlin. He obtained his doctorate in 2011, receiving in the same year the Research Prize from the German Tribological Society for his dissertation. Since 2011, he has worked for the Studienkolleg at TU Berlin, where he teaches engineering mathematics.