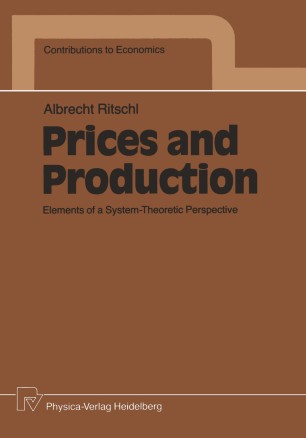 Elements of a System-Theoretic Perspective

My original intention in writing this book was to consider evolving mar­ ket systems and Hayekian criteria of efficiency (see von Hayek (1931, 1945) ), and to discover those formal structures which might possibly lie at the base of economic systems capable of evolution. Much work in this field had already been done by others (see, for example, Kirzner (1975) and Nelson/Winter (1982) ), and a consensus seems to have been reached that something like system theory must be the logical point of departure for evolutionary theory in economics. But most of the previous work in this area is purely intuitive, and though there is much talk in it of systems and system theory, a precise definition of the concept of a system in this context is nowhere to be found. I had hoped to be able to sketch a working definition of pricing and production systems in a few pages and then to go on to investigate their performance within the framework of modern stability analysis. It soon became clear, however, that difficult and complex problems arise from the very outset of such an endeavor. If, for example, one speaks of dynamic systems of pricing and production, it should be made clear just how these systems differ from those portrayed in standard price theory and why that theory is inadequate for such analysis.