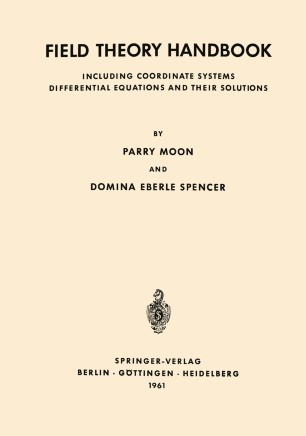 Including Coordinate Systems, Differential Equations and Their Solutions

Let us first state exactly what this book is and what it is not. It is a compendium of equations for the physicist and the engineer working with electrostatics, magne­ tostatics, electric currents, electromagnetic fields, heat flow, gravitation, diffusion, optics, or acoustics. It tabulates the properties of 40 coordinate systems, states the Laplace and Helmholtz equations in each coordinate system, and gives the separation equations and their solutions. But it is not a textbook and it does not cover relativistic and quantum phenomena. The history of classical physics may be regarded as an interplay between two ideas, the concept of action-at-a-distance and the concept of a field. Newton's equation of universal gravitation, for instance, implies action-at-a-distance. The same form of equation was employed by COULOMB to express the force between charged particles. AMPERE and GAUSS extended this idea to the phenomenological action between currents. In 1867, LUDVIG LORENZ formulated electrodynamics as retarded action-at-a-distance. At almost the same time, MAXWELL presented the alternative formulation in terms of fields. In most cases, the field approach has shown itself to be the more powerful.