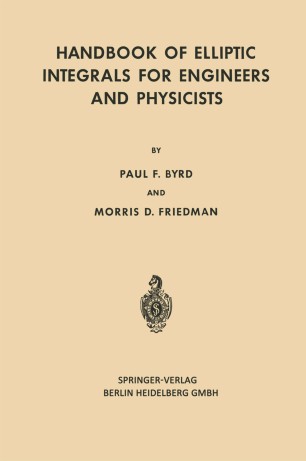 Handbook of Elliptic Integrals for Engineers and Physicists

Engineers and physicists are more and more encountering integrations involving nonelementary integrals and higher transeendental functions. Such integrations frequently involve (not always in immediately re­ cognizable form) elliptic functions and elliptic integrals. The numerous books written on elliptic integrals, while of great value to the student or mathematician, are not especially suitable for the scientist whose primary objective is the ready evaluation of the integrals that occur in his practical problems. As a result, he may entirely avoid problems which lead to elliptic integrals, or is likely to resort to graphical methods or other means of approximation in dealing with all but the siruplest of these integrals. It became apparent in the course of my work in theoretical aero­ dynamics that there was a need for a handbook embodying in convenient form a comprehensive table of elliptic integrals together with auxiliary formulas and numerical tables of values. Feeling that such a book would save the engineer and physicist much valuable time, I prepared the present volume.