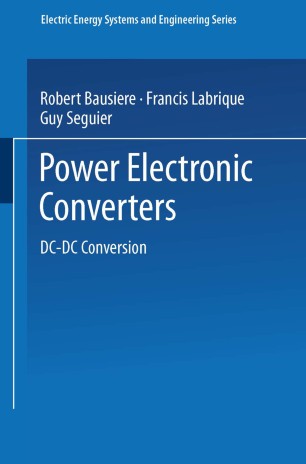 This book is the third in a series of four devoted to POWER ELECTRONIC CONVERTERS: The first of these concerns AC to DC conversion. The second concerns AC to AC conversion. This volume examines DC to DC conversion. The fourth is devoted to DC to AC conversion. Converters which carry out the DC-DC conversion operate by chopping the input voltage or current: they are called choppers or switch-mode power converters. Their operating frequency is not imposed by either the input or the output, both of which are at zero frequency. A frequency which is much greater than that of the industrial network can be chosen, provided that suitable configurations and semiconductor devices are used. This is the first difference compared to the rectifiers and AC-AC converters, analyzed in the previous volumes and which often operate at the industrial network frequency. The second difference concerns the commutation mode. Choppers operate in forced commutation. The beginning of an operating phase does not auto­ matically turn off the semiconductor devices which were conducting during the previous phase and which have to be brought to the blocking state. This turn-off must be carried out autonomously. These two differences - the higher frequency of commutations and, espe­ cially, the different mode of commutation -justify the first two chapters in this work: - Chapter 1 examines general notions concerning converters, supplies and loads, and more especially, how they can be characterized with regard to commutations.