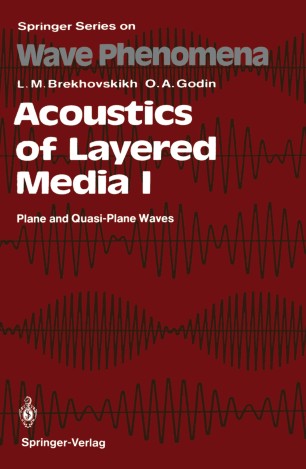 Acoustics of Layered Media I

This monograph is devoted to the systematic presentation of the theory of sound­ wave propagation in layered structures. These structures can be man-made, such as ultrasonic filters, lenses, surface-wave delay lines, or natural media, such as the ocean and the atmosphere, with their marked horizontal stratification. A related problem is the propagation of elastic (seismic) waves in the earth's crust These topics have been treated rather completely in the book by L. M. Brek­ hovskikh, Waves in Layered Media, the English version of the second edition of which was published by Academic Press in 1980. Due to progress in experimental and computer technology it has become possible to analyze the influence of factors such as medium motion and density stratification upon the propagation of sound waves. Much attention has been paid to propagation theory in near-stratified media, Le. , media with small deviations from strict stratification. Interesting results have also been obtained in the fields of acoustics which had been previously considered to be "completely" developed. For these reasons, and also because of the inflow of researchers from the related fields of physics and mathematics, the circle of persons and research groups engaged in the study of sound propagation has rather expanded. Therefore, the appearance of a new summary review of the field of acoustics of layered media has become highly desirable. Since Waves in Layered Media became quite popular, we have tried to retain its positive features and general structure.