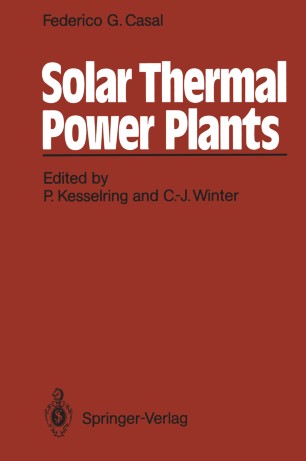 1. 1 Historical Background and Relationship to the lEA One of the objectives of the energy research, development and demonstra­ tion program of the International Energy Agency (lEA) is to promote the development and application of new and improved energy technologies which could potentially help cover our energy needs. Early in 1976, a working party for Small Solar Power Systems (SSPS) was created with the approval and encouragement of the Committee for Research and Develop­ ment of the International Energy Agency (lEA) [1]. At that time the following countries showed interest in attending the formative meeting: Austria, Belgium, Canada, Great Britain, Greece, The Federal Republic of Germany, Italy, Japan, Spain, Sweden, Switzerland and the United States of America. In its first meetings the SSPS Working Party explored the technological possibilities of the exploitation of solar power at small levels (photovoltaics, wind, waves and thermal power conversion) and also reviewed what was being done at that time in the domain of solar power in each of the participating countries. At a meeting in mid 1976 in Vienna, a study performed by MBB was presented. It stated that as distributed systems (systems using a large number of parabolic trough collectors "DCS", see chapter 4) grow linearly in terms of power, the associated costs grow as a function of the size of the intended system. By comparison, the cost per unit output of the central receiver systems ("CRS" , see section 5.