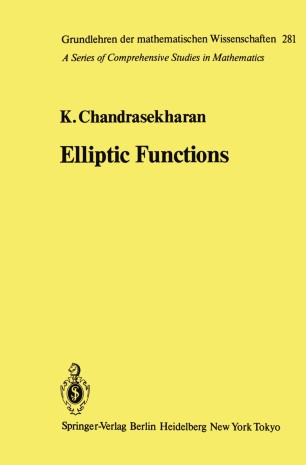 This book has grown out of a course of lectures on elliptic functions, given in German, at the Swiss Federal Institute of Technology, Zurich, during the summer semester of 1982. Its aim is to give some idea of the theory of elliptic functions, and of its close connexion with theta-functions and modular functions, and to show how it provides an analytic approach to the solution of some classical problems in the theory of numbers. It comprises eleven chapters. The first seven are function-theoretic, and the next four concern arithmetical applications. There are Notes at the end of every chapter, which contain references to the literature, comments on the text, and on the ramifications, old and new, of the problems dealt with, some of them extending into cognate fields. The treatment is self-contained, and makes no special demand on the reader's knowledge beyond the elements of complex analysis in one variable, and of group theory.

"...In the breadth, depth and inevitability of treatment of this beautiful material, the author has made a contribution to the mathematical community consistent with the distinction of his career. That he has succeeded in compressing this treatment into a succinct monograph of fewer than 190 pages is a testament to his taste, discipline and powers of exposition."-- MATHEMATICAL REVIEWS