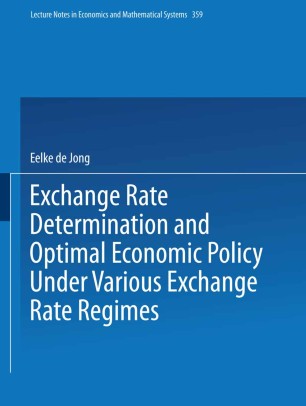 1.1 Some characteristics of the floating exchange rate system The flexible exchange rate system has functioned far less satisfactorily than many anticipated in 1973, when the major industrialized countries decided to let their currencies float. The dominant currencies' exchange rates have fluctuated more 1 than expected. These fluctuations concern both short-term movement- intraday fluctuations and movements during a week or a month - and long­ term changes that last for more than a year. Daily percentage changes of one percent are not unusual for the recent float (see MacDonald, 1988, p.8). However, the release of new information can give rise to much larger changes. For example in August 1987 "the dollar moved down 6 percent in two days based on the July trade figures" (Glynn, 1988, p. 36). For the period 1973-1985 MacDonald (1988, p.10) presents minimum and maximum monthly percentage exchange rate changes. These figures clearly illustrate the magnitude of the volatility and also show that the volatility has not diminished as the experience 2 with floating has increased. In addition to this volatility, exchange rates are also characterized by misalignment: "persistent departure of the exchange rate from its long-run equilibrium" (Williamson, 1983, p.l3). Although the measure of misalignment depends upon the exact definition of the exchange rate's long-run equilibrium, there is a widespread feeling that during the greater part of the 1970s the dollar was undervalued, whereas it was overvalued during the first half of the 1980s.