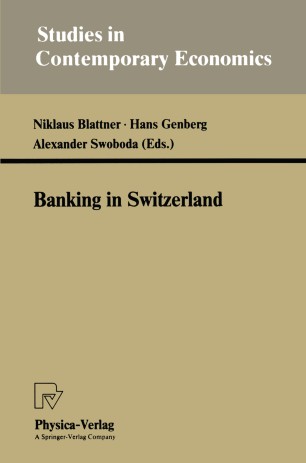 Oliver Landmann Nobody needs to be convinced of the importance of banking for the Swiss economy. The financial sector grew well above average in the past decade and now accounts for almost 10 % of GDP. Compared to the economy-wide average, it creates more than double as much value added per employee and it is a major contributor to Swiss ex­ port revenues. But this is no cause for complacency. The industry is subjf:ct to rapid change as the competitive climate has become rougher nationally and internationally. Major structural weaknesses have corne to the surface which raise serious questions about the extent of the required structural adjustments. Thus, banking was an ideal candidate for a major case study in the framework of the National Research Programme No. 28 which is devoted to Switzerland's external economic challenges. The programme was commissioned by the Swiss government and is carried out by the Swiss National Science Foundation. The research project on the fmancial sector was directed by Professors Niklaus Blattner, Hans Genberg and Alexander Swoboda who assembled a team of research economists from the Graduate Institute of International Studies, the International Centre for Monetary and Banking Studies (both at Geneva) and the Labour and Industrial Economics Research Unit at the University of Basel. This joint research effort has yielded an impressive crop of descriptive data, analytical insights and policy-oriented conclusions.