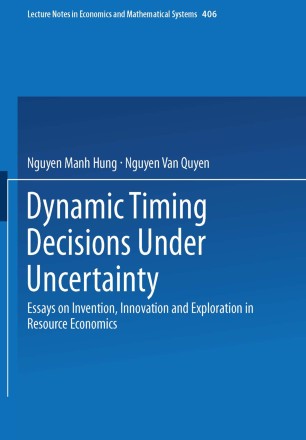 Essays on Invention, Innovation and Exploration in Resource Economics

Jay Forrester's Economic Dynamics was published in 1971 and The Limits to Growth by Dennis Meadows and his associates appeared a year later. The publication of those two books gave rise to twenty years of intense research into the economics of exhaustible resources, research which everywhere has had a substantial impact both on public debate and on academic curricula. And now, just as that line of research is losing steam, economists are focussing on problems associated with the degradation of the natural environment, problems which call for models which, in their formal structure, are quite similar to those already developed in resource economics. This is therefore an appropriate moment for the appearance of a thorough exposition of the economics of exhaustible resources. For that is what Nguyen Manh Hung and Nguyen Van Quyen have provided. Their splendid new book covers equally well the older Hotelling-inspired theory of cake-eating and the economics of search and R&D designed to uncover new and cheaper sources of supply. It provides an entree to the whole subject of resource economics, as well as many new discoveries which will be of interest to experienced researchers.