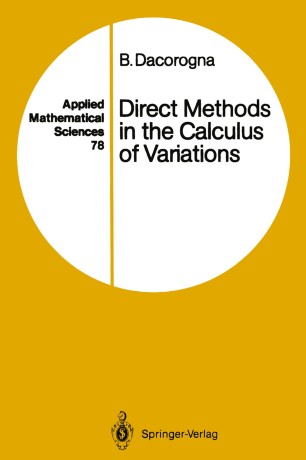 Direct Methods in the Calculus of Variations

In recent years there has been a considerable renewal of interest in the clas­ sical problems of the calculus of variations, both from the point of view of mathematics and of applications. Some of the most powerful tools for proving existence of minima for such problems are known as direct methods. They are often the only available ones, particularly for vectorial problems. It is the aim of this book to present them. These methods were introduced by Tonelli, following earlier work of Hilbert and Lebesgue. Although there are excellent books on calculus of variations and on direct methods, there are recent important developments which cannot be found in these books; in particular, those dealing with vector valued functions and relaxation of non convex problems. These two last ones are important in appli­ cations to nonlinear elasticity, optimal design . . . . In these fields the variational methods are particularly effective. Part of the mathematical developments and of the renewal of interest in these methods finds its motivations in nonlinear elasticity. Moreover, one of the recent important contributions to nonlinear analysis has been the study of the behaviour of nonlinear functionals un­ der various types of convergence, particularly the weak convergence. Two well studied theories have now been developed, namely f-convergence and compen­ sated compactness. They both include as a particular case the direct methods of the calculus of variations, but they are also, both, inspired and have as main examples these direct methods.