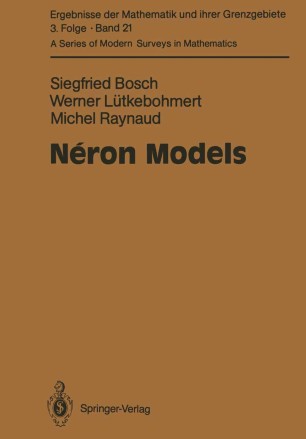 Néron models were invented by A. Néron in the early 1960s in order to study the integral structure of abelian varieties over number fields. Since then, arithmeticians and algebraic geometers have applied the theory of Néron models with great success. Quite recently, new developments in arithmetic algebraic geometry have prompted a desire to understand more about Néron models, and even to go back to the basics of their construction. The authors have taken this as their incentive to present a comprehensive treatment of Néron models. This volume of the renowned "Ergebnisse" series provides a detailed demonstration of the construction of Néron models from the point of view of Grothendieck's algebraic geometry. In the second part of the book the relationship between Néron models and the relative Picard functor in the case of Jacobian varieties is explained. The authors helpfully remind the reader of some important standard techniques of algebraic geometry. A special chapter surveys the theory of the Picard functor.