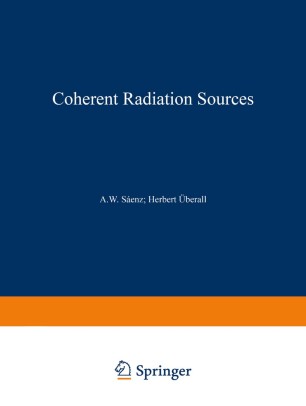 Energetic electromagnetic radiation finds frequent uses in science (e. g. , for expe­ riments in nuclear and elementary - particle physics), in technology (for materials testing), and in medicine (for medical X-rays). The most common method of genera­ ting such radiation is via the process of "bremsstrahlung" (a German term coined by A. Sommerfeld, meaning "braking radiation") in which a beam of electrons is direc­ ted into matter (e. g. , a metal target), losing energy during its collisions with the atoms and releasing this energy in the form of emitted radiation. The character of such radiation may be drastically changed by the use of a tar­ get with periodic structure (most commonly, a crystal target). The coherent waves emitted from individual crystal atoms interfere with each other, monochromatizing and polarizing the radiation and often increasing its intensity manifold, thereby creating a powerful radiation source of high quality for purposes of scientific and technical applications. This is true both for the well - established "coherent bremsstrahlung" process in which the interfering radiation is emitted while the electrons cross a succession of crystal planes, as well as for the more recently discovered process of "channeling radiation" (generating radiation of even higher intensity, but lower energy) in which the radiation is emitted while the electrons propagate along a crystal plane, or a crystal axis, in an oscillatory fashion.