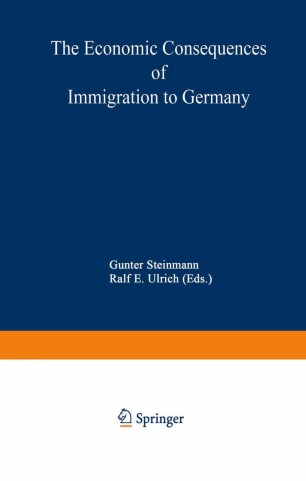 The Economic Consequences of Immigration to Germany

This volume discusses some economic aspects of immigration with special refer­ ence to the case of Germany. Immigration has become a major issue in Germany. Germany still does not have an official immigration policy in spite of the fact that more than 8 percent of the residents are non-citizens and that Germany · s immigration figures almost have reached the US figures. The foreign Iabor supply strongly influences the German Iabor market. The bulk of foreign workers is employed in certain industries. In some industries (mining, steel) 20 and more percent of the employees are foreign workers. Most foreign workers are blue collar workers with low wages. The Iabor demand for immigrants has declined in the last 15 years while the foreign population and Iabor supply has increased. As a consequence, foreigners experience higher unemployment rates than Germans. The fall of the Berlin wall and the collapse of the communist regimes in East Europe further increased the blue collar Iabor supply and strengthened the competition for foreign workers on the German Iabor market.