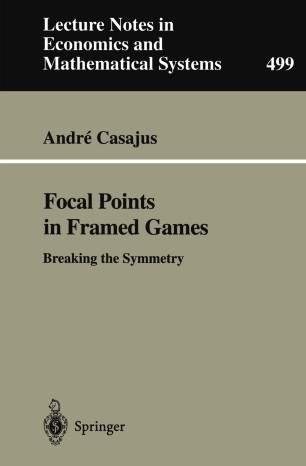 Go to, let us go down, and there confound their language, that they may not understand one another's speech. So the LORD scattered them abroad from thence upon the face of all the earth: and they left off to built the city. (Genesis 11.7-8) 1.1 Static Focal Points 1.1.1 Coordination In real life, people quite often face situations in which they prefer to act in the same way, but they are not particular about the concrete way of acting. Some examples are given below: Credit cards: Buyers want to possess the credit cards potential sellers do accept. Also, sellers wish to have contracted the credit card company the credit cards of which potential customers usually carry along. For both, basically, it is all the same which credit card this is. What matters is that both choices coincide. Communication, information transmission: The transmission of in­ formation requires that the signals used have the same meaning to both the sender and the receiver. But it is inessential which signal has a certain mean­ ing. In verbal communication, this basically means that the people involved use the same (natural) language, though even then some ambiguities remain. Things are a bit more difficult for non-verbal communication, for example data transmission between computers-both sides have to use the same or compatible protocols. Again, what matters is the protocols to be the same for both sides.