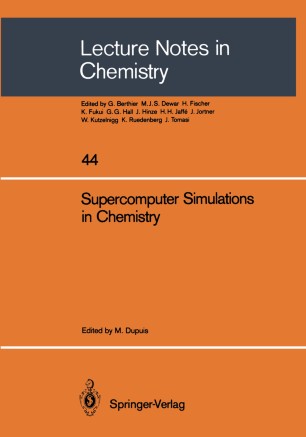 Proceedings of the Symposium on Supercomputer Simulations in Chemistry, held in Montreal August 25–27, 1985, sponsored by IBM-Kingston and IBM-Canada

Awareness of the need and potential of supercomputers for scientific and engineering research has grown tremendously in the past few years. It has culminated in the Super­ computer Initiative undertaken two years aga by the National Science Foundation and presently under full development in the United States. Similar initiatives are under way in several European countries and in Japan too. Thus the organization of a symposium on 'Supercomputer Simulations in Chemistry' appeared timely, and such a meeting was held in Montreal (Canada) in August 1985, sponsored by IBM-Kingston and IBM-Canada, and organized by Dr. Enrico Clementi and Dr. Michel Dupuis. In connection with this, IBM's support of the Cornell University Supercomputer Center, several projects in the IBM Research Division, the experimental parallel engine (ICAP) assembled at IBM-Kingston, and the announcement (Fall 1985) of an add-on vector feature to the 3090 IBM mainframe underscore IBM's commitment to high-end scientific/engineering computing. The papers presented in this volume discuss topics in quantum mechanical and statis­ tical mechanical simulations, both of which test the limits of computer hardware and soft­ ware. Already a great deal of effort has been put into using vector supercomputers in these two areae. Much more is needed and, without doubt, ie bound to happen. To start, an historical perspective of computational quantum chemistry is provided by Professor Löwdin. The contribution by Ohno and co-workers gives an indication of the present status of Japanese supercomputers. Kutzelnigg et al. , Bauschlicher et al. , and Guest et al.