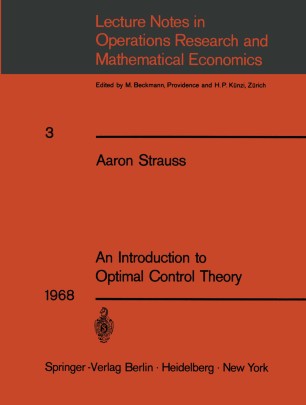 An Introduction to Optimal Control Theory

This paper is intended for the beginner. It is not a state­ of-the-art paper for research workers in the field of control theory. Its purpose is to introduce the reader to some of the problems and results in control theory, to illustrate the application of these re­ sults, and to provide a guide for his further reading on this subject. I have tried to motivate the results with examples, especial­ ly with one canonical, simple example described in §3. Many results, such as the maximum principle, have long and difficult proofs. I have omitted these proofs. In general I have included only the proofs which are either (1) not too difficult or (2) fairly enlightening as to the nature of the result. I have, however, usually attempted to draw the strongest conclusion from a given proof. For example, many existing proofs in control theory for compact targets and uniqueness of solutions also hold for closed targets and non-uniqueness. Finally, at the end of each section I have given references to generalizations and origins of the results discussed in that section. I make no claim of completeness in the references, however, as I have often been content merely to refer the reader either to an exposition or to a paper which has an extensive bibliography. IV These 1ecture notes are revisions of notes I used for aseries of nine 1ectures on contro1 theory at the International Summer Schoo1 on Mathematica1 Systems and Economics held in Varenna, Ita1y, June 1967.