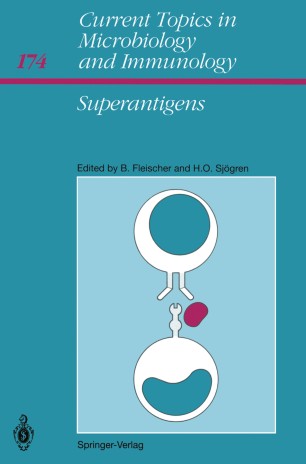 This volume of Current Topics in Microbiology and Immunology is concerned with a class of molecules that are the most potent polyclonal stimulators of T lymphocytes of several species. These molecules have been named "superantigens" because they use a mechanism of T cell stimulation closely mimicking MHC-restricted recognition of specific antigen: they act on variable parts of T cell antigen receptors and are presented by MHC class II molecules. Prototypes of these molecules are the pyrogenic exotoxins produced by S. aureus and S. pyogenes, of which the staphylococcal enterotoxins and the toxic shock syndrome toxin are the best known. Superantigens also occur endogen­ ously in mice, most notably the enigmatic Mis determinants, that have withstood characterization for nearly 20 years. Only very recently was it found that Mis is probably encoded by endogenous retroviruses. The list of candidates that are implicated as being superantigens is growing. In many cases, however, the proof that a given molecule indeed falls into this category is still missing.