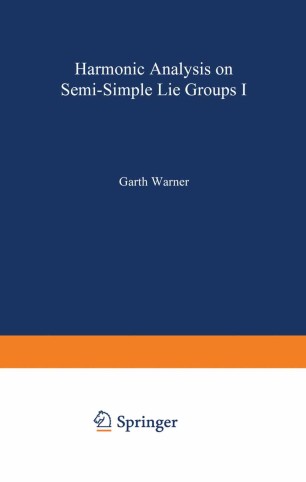 The representation theory of locally compact groups has been vig­ orously developed in the past twenty-five years or so; of the various branches of this theory, one of the most attractive (and formidable) is the representation theory of semi-simple Lie groups which, to a great extent, is the creation of a single man: Harish-Chandra. The chief objective of the present volume and its immediate successor is to provide a reasonably self-contained introduction to Harish-Chandra's theory. Granting cer­ tain basic prerequisites (cf. infra), we have made an effort to give full details and complete proofs of the theorems on which the theory rests. The structure of this volume and its successor is as follows. Each book is divided into chapters; each chapter is divided into sections; each section into numbers. We then use the decimal system of reference; for example, 1. 3. 2 refers to the second number in the third section of the first chapter. Theorems, Propositions, Lemmas, and Corollaries are listed consecutively throughout any given number. Numbers which are set in fine print may be omitted at a first reading. There are a variety of Exam­ ples scattered throughout the text; the reader, if he is so inclined, can view them as exercises ad libitum. The Appendices to the text collect certain ancillary results which will be used on and off in the systematic exposi­ tion; a reference of the form A2.