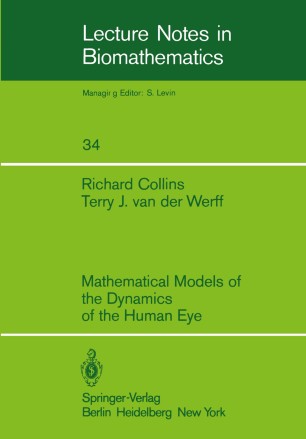 Mathematical Models of the Dynamics of the Human Eye

A rich and abundant literature has developed during the last half century dealing with mechanical aspects of the eye, mainly from clinical and, experimental points of view. For the most part, workers have attempted to shed light on the complex set of conditions known by the general term glaucoma. These conditions are characterised by an increase in intraocular pressure sufficient to cause de­ generation of the optic disc and concomitant defects in the visual field, which, if not controlled, lead to inevitable permanent blindness. In the United States alone, an estimated 50,000 persons are blind as a result of glaucoma, which strikes about 2% of the population over 40 years of age (Vaughan and Asbury, 1974). An understanding of the underlying mechanisms of glaucoma is hindered by the fact that elevated intraocular pressure, like a runny nose, is but a symptom which may have a variety of causes. Only by turning to the initial pathology can one hope to understand this important class of medical problems.