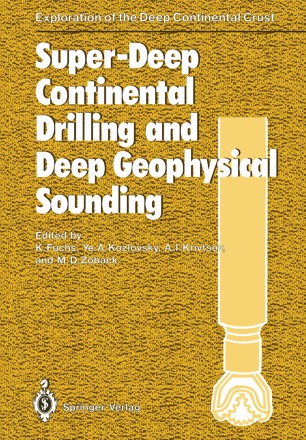 The articles in this volume were selected from a series of reports delivered in the So­ viet Union at Yaroslavl during the International Seminar "Super-deep drilling and deep geophysical research", which was organized and held in August 1988 by the Ministry of Geology of the USSR, jointly with the Inter-Union Commission on the Lithosphere. One of the most important problems of modem geology, is the state and prospects of further development of deep continental structure investigations, was discussed at the seminar with the participation of 245 scientists and specialists from 19 countries. At the plenary and sectional meetings of the seminar, 83 reports were delivered, discussions on the most interesting problems were organized, the exchange of ideas between the leading scientists a round table took place in discussion. The distinctive feature of the present collection of articles is the wide scope of the investigation of the Earth's crust. The reports elucidate such subjects of world impor­ tance as (1) achievements in implementation of major scientific programs investi­ gating deep Earth structure and plans for their further materialization; (2) theoretical problems of carrying out geological-geophysical explorations and drilling operations; and (3) new approaches to the study of the Earth's interior. The results of deep inves­ tigations of individual countries and organizations are considered, and concrete tech­ nical elaboration, methods of work execution, etc. are discussed.